........ as 2006 has drawn to a close, and we are all stood around the stables thinking about working off those Xmas excesses, one of the less taxing activities was to tidy up the archives... So what did happen in 2006? (as I write this, it does seem more than I remember)

The festival circuit was also a voyage to pastures new as well as some familiar. The highlight for most was playing 2 nights at the prestigious Montreux Jazz festival. (don't be fooled by the Jazz bit, there is a fair amount of Rock and a streak of Celtic). We must have been doing some thing right as we were cleared out of CDs during the first show. Farmer Phil's also provided some excellent amusement with his circular (ex milking parlour) stage - Andy started writing some interesting diaries from these times, so for more about the festivals, and a round up of the 2006 shows see here 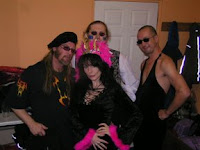 Again there were 2 Xmas bashes, and the theme this year - Black beauty and the beast of mac goth, gave just the excuse for all the male members of the band and crew to dress in Kilts (black of course). Pictures are available for the right price!! or just go to the new gallery.

The band made 2 exclusive radio shows, the first for ARfm was more of an extended interview with some tracks, the second for Radio Caroline was a concert recorded especially for the Rob Leighton show.

The DVD finally got released. We are very proud of this production which stand up to critical acclaim. David Wheeler was again (he also directed the Live Video) at the controls. Purchase it here

The band created pages on Myspace, and YouTube, and a number of blogs on blogspot. At the same time we revamped the mechandise pages and also added the DVD and CDs to Amazon.com. Additionally we added discography and lyricon pages to the main website, and Andy created a huge new gallery, including a load of photos never seen in public before!

The sad news of the year was the departure of Nathan, and whilst the search is on for a replacement Rob Khoo is currently helping out.

Posted by Bluesky Miner at 11:54 No comments: