**** S T O P P R E S S ****
Just released ... We're dead chuffed to announce that Jo and Paul from MaryJane will be supporting Bluehorses at the Winchester Xmas bash. They will be performing an acoustic set to get everyone in the mood.
Ticket info below...

Posted by Bluesky Miner at 07:42 No comments:

Hope you've not been washed away - we've been upgrading the flood defences here at BH Towers just in case the river gets too exciting.

Sunday the 10th finds the band back at the fab Robin in Bilston, Wolverhampton, supported by a great up and coming act, 6 Day riot who've been creating some real ripples in the business.
http://www.therobin.co.uk/

Then we have the legendary BH xmas bashes...

(Black) Beauty and the Beast (of Macgoth)

So get ya goth princess frocks and kilts out, join in the seasonal silliness, outdo ya mates and win yaself a prize!

See you down there!

Ned
Posted by Bluesky Miner at 00:36 No comments:

Hi all, just a reminder that the mighty 'Horses will be returning to Southampton for the first time in a LOOOOONG while!

The special one-off show is on November 4th - that's this coming Saturday folks - venue is The Brook, Portswood Road

Hope to see you down there to witness the return of long time bassist Rob Khoo... back in the fold for a few shows only, and it'll be seriously rockin' guitarist Jay MacDonalds' first Soton show - catch 'em while they're hot!

If you haven't seen the band in a while, then there's some storming new music in the set. And if you have... they've just re-introduced some old favourites.

Something there for everyone then, you lucky, lucky people :o)

We'll have CDs on sale, and if you haven't seen the fantastic 'Live at Saul Festival' DVD - here's your chance to grab a copy at a bargain price.

That's it for now - see you down there!

Ned
http://www.bluehorses.co.uk
Posted by Bluesky Miner at 20:49 No comments:

But that's the way it always is... BH music is very hard to write. When you listen to a Bluehorses song or tune, it'll usually sound pretty straightforward - if occasionally a little, ummm... unusual! in places, but the arrangements are actually very complex to give it that BH sound.

We don't always know what makes a Bluehorses song... but we definitely know what doesn't!!
To quote the Great Tap, it's a fine line between clever and stupid and we have to filter out a lot of the stupid to get the clever. When you fuse heavy rock and Celtic/folk themes, it's only one small wrong step that takes you off to Stonehenge :o)

But saying that, the writing process has been the smoothest it's ever been and is all coming together really well now... demo versions of an hours worth of music have been recorded and the band are very excited with the results. More writing sessions are imminent, Nic will start laying definitive drum tracks down in the next couple of weeks, and it looks like we're on target for release early in the New Year.

That's about it for now folks, thanks for listening and don't forget to tune in to Radio Caroline next Thursday, 10pm and join the band in a very special, if tiny, part of rock radio history.

Slainte... Ned
Posted by Bluesky Miner at 09:52 No comments:

Apologies if you've already received this, we appear to have had gremlins, 3 goblins and a troll in the machine who put quince jam and a blunt trout in the newsletter system and brought it to a standstill at an unidentified point during transmission :o

The band and entourage had a fab time in Montreux a couple of weeks ago and there's an excellent write-up with lots of cool pics by Andy up on the site:
http://www.nativespirit.co.uk/andys_montreux.htm

Next, a reminder of 3 great festivals coming up in August...
August
5th - Wickham Festival - nr Eastleigh Hants http://www.wickhamfestival.co.uk/
11th - Farmer Phil's Festival - Shropshire http://www.farmerphilsfestival.co.uk/
20th - Rockin Beer Festival - Cambs
http://www.rockinbeerfest.co.uk/
Hope we see you somewhere - don't forget to come and say hi... it's always good to put a face to a name (ah... zodflurn747@hotmail.com, pleased to meet you at last, tho' to be honest I'm quite surprised to find you are in fact a giant pink squirrel)...

We're well on the way with a plethora of exciting new material for the next CD - it's Very 'eavy, Very 'orses, but with a few different twists along the way as usual! We now have our own studio set up at BH Towers, so can spend as much time as we need to produce a storming album without having to send Andy down to the docks in his best frock again.

And there'll be some terrific new stuff on the site in the next couple of weeks, courtesy of Mike Techno Furmston!!

Have a great summer all - see you soon

Ned, and all at BHT x
Posted by Bluesky Miner at 13:02 No comments: 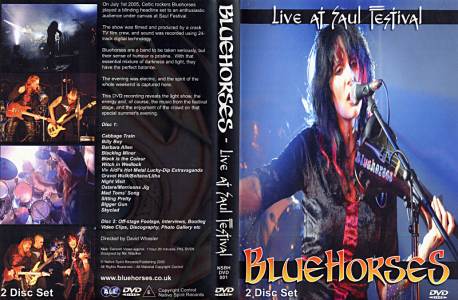 DVD
http://www.nativespirit.co.uk/DVD.shtml
Apologies for sending a couple of newsletters so close together, but from all the emails, I know many of you are very keen to get hold of the DVD as soon as possible

And now you can!

We finally took delivery of the first batch of 2000 shiny dvds this morning...

Or rather Jay did, as the rest of us hid in the dovecot, cos we knew the pallets wouldn't fit through the door, requiring to be offloaded box by box, and feeling that kind of manual labour a little beneath us, heheh.

Pretty damn fine they look too

The dvd is now available in the amazon.co.uk shop (and by snailmail-order and there's a selection of excerpts for you to download if you just can't wait for yer order to come through - they're small-screen sample clips, cos of download time, but it'll give a fair idea of what you've all been waiting for

The real thing is, of course, quite stunningly high quality, full wide-screen with digital stereo sound.

So now I'll just sit back with me jiffys in me hand, waiting for the floodgates to open oo-er missus...

NB. The dvd is in PAL format, which will play on any computers with DVD worldwide. It'll also be fine on all TVs in most places - except the States I believe. (It's 'All-Region' playable)

If any of our good friends in the US would like an NSTC copy - we can burn DVDRs to order. Please send us an email via the contact page on the website and we'll sort it out.
Copies of the DVD will also be on sale at...

The band are playing a one-off show at the Robin2, Bilston, Wolverhampton on Sunday 2nd April - come and get your DVD in person... The guys will even stick their monikers on it for you :o)
http://www.therobin.co.uk

This has just been brought to our attention...

We've had well over a couple of hundred emails over recent years asking if we have any of these - we don't even have one ourselves!

This is the original NSBH CD001 disk, (blue design on white background) and has the track 'Farewell to JK' which didn't make it onto the later remastered version owing to a tech problem.

The main difference from the release copies is this one has laser-printed paper parts, with a different design.

That's it from me for a while now, enjoy the w/e and we'll look forward to meeting up with some of you in April

Cheers, Nedx
Posted by Bluesky Miner at 21:55 No comments:

"Bluehorses... probably the only Celtic-Heavy-Folk-Rock-Metal-Goth Band in the world" - BBC.co.uk

Greetings from Bluehorse Towers
And a special welcome to all the hundreds of new Horseheadz from all across the world who've signed up since my last missive.

Hope all is well in your world?

Much going on here at the Towers:

First, must remind you about the Sunday April 2nd show at the Robin2, Bilston, Wolverhampton ( http://www.therobin.co.uk )

After a frustrating delay, we should be taking delivery of the first 2000 copies of the 'Live at Saul Festival DVD' in the next few days. Once we have them in our hands, they'll be available from the online store at http://www.nativespirit.co.uk and I'll send out a quick 'mail to let you know they're up there.

For those that don't know (and from all the mail we've received about it over the last few months, that can't be many!) the bands' headline show at last years Saul Festival was filmed by a crack team of TV cameramen led by our good pal and top BBC director, David Wheeler.

It's a 2-disk set, one with the full concert on it which looks fantastic with stunningly high quality video and lightshow and superb 24-track digitally recorded soundtrack. Disk 2 features some cutting edge DVD design and includes a plethora of goodies, with off-stage/camp site footage (including the traditional BH festival chair-racing derby!), interviews with the band members, some live 'bootleg' vids and more... much more :o)

Yup, we know it's been a while, so the band have been worthily ensconced in the studio at BH Towers in the final throes of writing material for a new full length CD Album.

Can't say too much at the moment, but the band are really excited about how it's shaping up and the priviledged-few others who've heard the demos reckon it's the bee'z.

As someone said on hearing some early clips...

With a projected release date of early autumn, we're looking into producing an 'enhanced' CD - with a couple of video tracks to compliment the main audio tracks.

Well, I'm running late for me midnight oats and Mrs Neddy is threatening to pull the plug, so I'd best say farewell and hit the sack...

Thanks for listening
Nedx
Posted by Bluesky Miner at 01:45 No comments: