Bluehorses July she will fly... and so she did!

July continued in the same vein as June - rain and more rain. Luckily none of the band were caught up in the flooding, but Andy from the crew spent a long time stuck on the M5 because of it. He made up for the experience by terrorising the locals with a Unimog (if you've not met one of these beasts before it is a 4*4 truck crossed with a seriously large Quad bike) helping to get feed to the animals.
We were all very sorry to see the Chepstow show postponed - I was looking forward to a trot around the course! - but just looking at the news coverage will give a suitable reason for this action, so there can't be any complaints. We will let you know when it get re-scheduled.
In a similar vein the Salisbury festival show has been canceled, again for reasons beyond our control, but this one is unlikely to get re-scheduled this year. 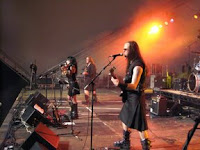 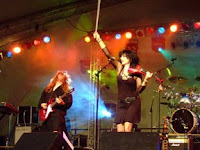 There were two excellent shows one at Cardiff and one at Spratton. Reviews can be found on the Tailz blog, with pictures in the gallery - a great thanks to Mike H and Dave J for allowing us to add their photos. There is also some dodgey video floating around of Rhayn and a Bull ride , but he is keeping me in sugar lumps at present!

August sees 4 shows, with the first one just coming up on the Saturday 11th at Farmer Phil's Festival on the main revolving stage.

Later on we are at the Cambridge Rock festival and then at Peterborough Beer Festival (this is a Thursday night) and at Solfest to round it off. - Keep up with the "up-to-the-minute" news by going to the news blog

****Breaking News**** Radio Caroline are planning to broadcast a live set from each day at the Cambridge Rock festival, and guess what!! - Bluehorses will be providing the set for the Saturday show... I had better make sure there are several rehearsals on the calendar, I would not want them embarrassing themselves!
Other than that; the steam continues to pour out of the studio here at Bluehorse towers, and there is still no one to gossip with :( although I am hopeful that the Iolo and Bran will pop round to have a chat now the sun has deigned to appear.
A couple of the new tracks have made it into the live set so far and were well received at the Point and Spratton. Raggle is a reworking of Raggle Taggle Gipsyo from the dim and dark past - for those who were around then it used to be in the live set when Dave and Jonathan were with the band, and also on the Dark Circus EP (only available on Cassette tape at the time, and now deleted - C30C60C90 anyone!).
The other new track, (under the working title of Hen but now looking like being called Waes Hael. A track of tremendous pace, which has a slight Balearic feel and is bound to get every one bouncing. The name imparts an idea of drinking and merriment, plenty of the latter, but I suspect that much of the former will be spilled as it is far too energetic!
Anyway more shows this month, and things are looking brighter ... so see you there!